“On November 21st 1992 I was married at the Edgefield in Troutdale, Oregon. We were determined to keep the budget as low as we could, and that meant keeping the invite list to under a 100 and asking for help from all our friends. My friend Dianna did the flower arrangement. My friend Kurt did the photography, and we turned to our favorite Portland band Heatmiser to play a 50 minute set. I knew Elliott personally and I went to his workplace (Le Panier bakery in downtown Portland) and asked him if he would be interested in playing. To my pleasure he said yes. END_OF_DOCUMENT_TOKEN_TO_BE_REPLACED

“My introduction to Elliott Smith was perfect. Songwriter/producer Jon Brion, who has always been a lightning rod for creative goodness, phoned me up and said, “I have something that you have to have.” He showed up in a coffee shop the next day, still wearing his pajama top over jeans, sheet wrinkles fresh on his cheek, and presented me with three CDs, Roman Candle, Elliott Smith and Either/Or. Now, I like a good pop record as much as the next guy, but very few things will propel me out of bed with a compulsive need to share. “Imagine the best of Paul Simon’s lyricism and melody, Simon and Garfunkel’s harmonies with those fragile Nirvana verses. You, of all people, have to hear this. You’re going to love it. It’s amazing.” Driving away, I popped in Either/Or. It was playing in the background, I was talking to someone … and then I heard it. I had to pull over. I was doing that thing you do, when you stare at the CD player, at the wondrous device that is allowing a blue rental car to become an emotional transporter, to become a bearer of art. It was pure pop revelation.” 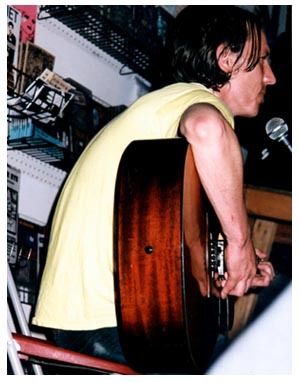 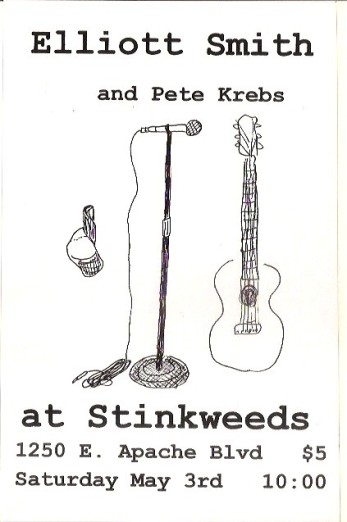 “When I met Smith, he came across as gentle and fragile, speaking softly and slowly, pondering each question before he replied. After his in-store performance at Stinkweeds Records in Tempe, he accepted an invitation to continue drinking beer at my house. There were six other people present, one who brought an acoustic guitar, leading Smith to start a round-robin of songs — though no one especially cared to compare their talents to his. END_OF_DOCUMENT_TOKEN_TO_BE_REPLACED 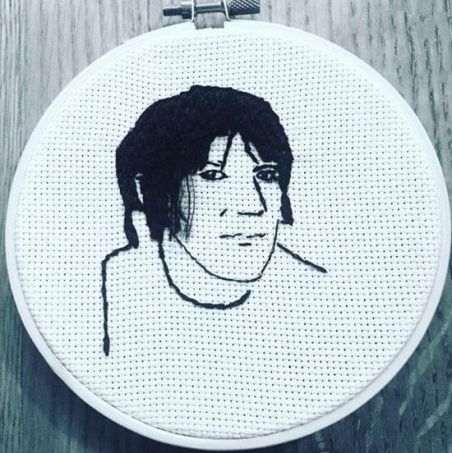 “I got introduced to Elliott via Mary Lou Lord during an interview with her. She asked me if I was coming to her show at Mercury Lounge that night and when I said I was she said “ you have to check out the opening act, Elliott Smith. He’s a cross between Kurt Cobain and Lou Barlow. I should be opening for him!” END_OF_DOCUMENT_TOKEN_TO_BE_REPLACED

©Geoff Koch – “An unexpected photo from the past. me and Laura Wilson in 2001 at the Silverlake Street Fair right after we had given a sign we got Elliott Smith to autograph to a guy who had come from Pennsylvania (Geoff Koch) and his cousin Amanda. me and Geoff started chatting on Youtube the other day about the show and he mentioned that he had gotten an autographed sign at the show. it clicked in my head and I said, I think we gave you that sign. he sent me this photo. sure enough. considering that there were about 8,000 people on the street that night for the show, that’s a pretty amazing coincidence.” Erik Meade

“I may be the guy Erik is talking about, here. I was visiting from St. Louis at the time, at the show with some cousins. Hyped him up all trip, and was bummed out by the show. I didn’t know he’d been having problems. The tarp on the chainlink backstage fence hung low in one area and we managed to get the attention of Erik and/or Elliott’s girlfriend at the time. END_OF_DOCUMENT_TOKEN_TO_BE_REPLACED

“I would see him in Amherst center playing guitar in front of the Unitarian church. It was where everyone hung out, smoked weed, hackey sacked , skateboarded. There was a handicapped ramp there, and some low walls. There was usually someone playing guitar there. In 1989 or ’90, 7th grade for me, I remember listening to Elliott doing a song and was mesmerized. It was very powerful compared to the other kids who played. I was a hick kid, from Shutesbury, in the big regional jr. high school. END_OF_DOCUMENT_TOKEN_TO_BE_REPLACED

“I loved Elliott Smith. He was difficult, and he was depressive, but he was also hilarious, according to people who knew him, and you can see/hear it in interviews. I met him on my birthday, February 20, 2000, in Washington DC, after a gig at the Black Cat. It was an intimate show, a very warm crowd. He was straight, and nervous. He made lots of jokey comments and asides, and interacted with us.
Afterward, he just sort of hovered, shuffled from foot to foot, and looked awkward. I went up to the stage, which was pretty low anyway, to see how he was doing. He sat down on the side of the stage. END_OF_DOCUMENT_TOKEN_TO_BE_REPLACED

“My first exposure to Elliott Smith came when I was working at a college radio station and he was in the press following his Oscar nomination. I never really heard his material until I caught the video for “Son Of Sam.” The music floored me, it was so different from anything else you would have heard in ’98/’99, but the emotions were so powerful. What’s more, when I was in second grade our class watched The Red Balloon, which the video was based on. For a 7-year-old, that movie was about as dramatic as you could imagine. This made the song’s sentiment sting all the more. And though I’m not down anymore, that song resonates cause there’s a solidarity in knowing someone has a sense of how you feel. Elliott Smith had a gift for that kind of empathy. END_OF_DOCUMENT_TOKEN_TO_BE_REPLACED