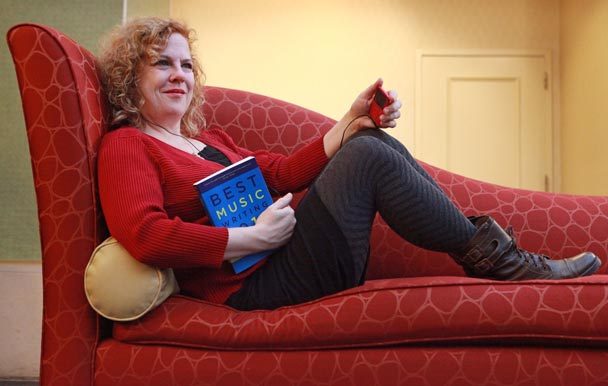 “My friend Felice was Ellliott’s publicist during his rise to fame, and I met him a few times through her. Once I moderated a conversation between him and Mary Lou Lord, for SPIN, I think. I remember him as one of those darkly gentle guys who couldn’t quite push himself forward enough to be comfortable in the world – except in his music.

My favorite moment seeing him live was at NYU, around the time of the Oscar nomination. He played to a hushed room (of course) and mid-set he broke into Bob Dylan’s “Don’t Look Twice, It’s Alright.” For that short while, he was the voice of his generation. But of course, he wasn’t one to take on such roles – which is probably why his favorite 1960s icon was George Harrison, the quiet one.”

“Recently, on a trip to Mexico, I was caught off-guard by a cover of Elliott Smith’s “Between the Bars.” The version sounded so much like Billie Holiday that I was instantly dumbfounded. How, I wondered, could Billie Holiday cover Elliott Smith? – it was impossible. Slightly less impossible was Smith’s song as a cover of Billie Holiday. But this didn’t sit right either, and so when I learned that the performer in question was Madeleine Peyroux, I was relieved, even pleased. I’ve always thought of Elliott Smith as a musician whose sound and sensibility are deliberately at odds. Peyroux’s version only confirmed this impression for me; hers is a languid, slinking, sonorous rendition, one that displays a wide range of expression and phrasing. Smith’s harmonies and melodies just aren’t as extravagant. END_OF_DOCUMENT_TOKEN_TO_BE_REPLACED

“Kurt Cobain wasn’t ours, in Portland. As suburban middle-schoolers who mass-transited it into town every weekend to pick up our copies of The Rocket, we loved Nirvana, naturally. But after the suicide, my punk-rock songwriting pal and I felt a little bit angry—left behind. And so we were excited about the beginnings of Candy Ass Records, each of us devoting hard looks to each new CD from the label that showed up at Ozone on Burnside, across from Powell’s. We didn’t need it to become as big a deal as Sub Pop; we just wanted something we could get next to from the start. END_OF_DOCUMENT_TOKEN_TO_BE_REPLACED

The night I met Elliott Smith
It was cold but manageable
Damp wet kinda cool
I saw him play, on a whim
By chance
By grace
By sheer consequence
I wasn’t overly familiar
Just a songwriter
newly crowned  END_OF_DOCUMENT_TOKEN_TO_BE_REPLACED

“In the summer of 2002, I’d just returned to L.A. from Eastern Europe – Belgrade -where I could live cheaply and so work full-time on a novel. To my frustration, the novel still required extensive surgery, and one night, in lieu of taking an axe to my computer, I drove to Ralph’s Supermarket on Glendale Boulevard. It was three in the morning, but there was a longish line at the cash register, and the customer immediately behind me was Elliott Smith. The checker wandered off, and I wondered if I should say anything to Elliott. END_OF_DOCUMENT_TOKEN_TO_BE_REPLACED

“I did have the fortune of meeting Elliott Smith and, like many others who’ve had the honor, I found him to be an open book. I had just flown back to LA from vacationing in Uruguay. The flight was over twenty hours long and I had a severe case of jet lag when my editor called me up and asked if I wanted to interview Elliott Smith that night at a Silverlake club called Spaceland. We’d been trying to get an interview with him for months and, as tired as I was, I couldn’t pass it up. My first meeting with Elliott at Spaceland was somewhat surreal. I remember being nervous because I heard he was difficult to interview. I had no need to be. Elliott was forthcoming and funny yet also humble and extremely shy. It was a short interview as he had yet to soundcheck and, although he promised a follow-up, I thought the quick forty minutes we had with him would be it. END_OF_DOCUMENT_TOKEN_TO_BE_REPLACED

“The saddest part is that music was a respite for this gentle and fragile guy, and he was just starting to get to a place where he could express himself again in the way he loved doing.”

“Staking out the shadows between melancholy and fatalistic, Elliott Smith wrote pretty tunes that assumed the worst. At least that’s the critical shorthand on one of the more easily stereotyped artists of the last decade. But there’s more to Smith and his music than such faulty caricatures suggest.
A lyric from the song that opens Smith’s final studio album, “From a Basement on the Hill” plays right into the tortured-artist cliché: “I’ll never be good enough for you.” Of course, it’s tempting to read even more into Smith’s pessimism now that he’s gone, his death from two stab wounds last year instantly elevating him to rock-martyr status. END_OF_DOCUMENT_TOKEN_TO_BE_REPLACED